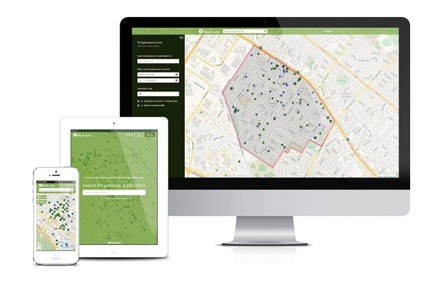 Earlier this month, buildingeye joined with the City of Palo Alto and Accela on a webinar to share how we worked together to bring life to Palo Alto city’s planning data in just a matter of weeks.

After a brief introduction by Ken Sawtelle, Director of Accela’s Center of Excellence team, I introduced Roland Rivera, a Land Use Analyst in the City of Palo Alto, who demonstrated and explained how he uses the buildingeye application to enhance his daily work with better outcomes and efficiencies.

Dealing with over 400 planning applications per year, from variances to individual and architectural reviews including amendments and zone changes, the City needed an easier way to share data.

The City of Palo Alto was already using Accela Planning on the Civic Platform, so all of its planning data was held electronically since July 2011.

Roland and his team decided they “…needed a spatial component where someone could look at a map and see all planning applications, and when they clicked on a pin, they would get basic information about a particular record backed up with the original documentation records held by the city.”

We worked together to assist them to share their data in a more usable format. Palo Alto went live last November, and City staff and the public can now find the information they need in only two clicks.

The key benefits that Roland discovered through using the buildingeye application was its speed of access to the data that he needed as a planner – this is also true for the citizens, who can find information anytime on any device. They can search or click on a pin in the area of interest, and the search tool makes it easy to find what they’re looking for.

Planners only enter data into the Accela Civic Platform once. The data is refreshed every day in the buildingeye application using the Accela Construct API. 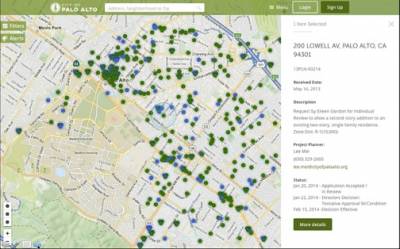 The public counter at the City of Palo Alto is also using the buildingeye application, which provides easy access to the information when dealing with queries. The workflow associated with each record is now available and includes the planner responsible. This feature has greatly reduced the amount of status queries attended to by city officials when dealing with the public.

From a governance point of view, buildingeye helped the City of Palo Alto to visualize applications that had slipped. Now it is simple to see completed and open applications on a map so that they can be dealt with in a timely manner.

If you already use Accela Planning, buildingeye is a complementary application that can be up and running within six weeks. In addition to planning applications, the buildingeye application can also share building permit and code enforcement information.

I would like to thank Roland, Ken and all those who attended the webinar to learn about the buildingeye application and how it works seamlessly with the Accela platform. See for yourself how it works at https://paloalto.buildingeye.com or request a demo to see what we can do for your city.