Looking for the Next Great Civic Startup: The Accela Civic App Challenge

That’s why we were thrilled several weeks ago to launch the Accela Civic App Challenge.

The Problem
The biggest challenge facing governments in adopting new civic technologies is the absence of an easy way to incorporate new solutions into their existing IT infrastructure. Creating a framework in which civic hackers and entrepreneurs can build smart new apps that can easily be adopted by governments has proved daunting and has caused some in the civic technology community to worry about the movement’s future viability.

At Accela, we’re working to address this challenge through the Civic Platform and the Accela Construct API.

The Opportunity
The Construct API provides a way for third-party developers to build apps that integrate directly with the Accela Civic Platform, which our customers already use to issue building permits, grant business licenses, manage infrastructure assets and provide dozens of other services to the people they serve. It’s the embodiment of the idea of “government as a platform,” first championed by Tim O’Reilly and the impetus for the civic hacking movement. 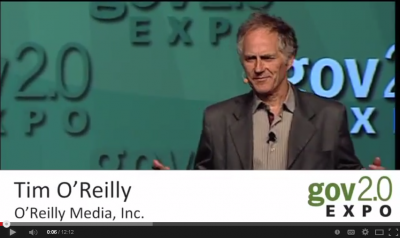 Tim O’Reilly presents “Government as a Platform for Greatness” at Gov 2.0 Expo 2010

Our Civic Platform allows governments to engage with outside developers and leverage third-party apps to enhance their services without investing in new infrastructure. It helps foster the development of mature, reliable civic solutions that don’t burden governments with costly maintenance and upkeep.

For developers and civic technologists, the Accela Civic Platform provides an easy way to develop new solutions for a broad audience of potential government customers. Because we offer support for development partners and those developing solutions using our Construct API, developers get the assurance of a more reliable revenue stream to help support continued development and enhancements to their apps.

The Accela App Challenge
The Civic Platform allows us to partner with smart, agile and new civic technology companies like Civic Industries and Open Counter. We’re working with these startups, and many others, to bring new ideas and new ways of doing business to governments across the country.

The Accela App Challenge is a way to help identify the next set of ideas that can turn into tomorrow’s civic startups. We’re excited to reward and showcase the best new ideas for helping governments do their jobs better. There’s $25,000 and a trip to San Diego where you’ll present your idea in front of hundreds of government officials at stake.

So what are you waiting for? Head on over to Hacker League (which we’re using to manage the App Challenge) and get started.

The idea that sparks the next great civic startup could be yours.