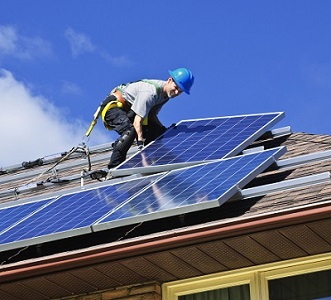 The below is a guest article I published in North American Clean Energy earlier this month.

In 2015, the solar industry celebrated three historic moments — in Paris, world leaders came together and agreed to reduce greenhouse gas emissions and reach zero emissions by the middle of the 21st century; in Washington, D.C., Republicans and Democrats briefly put aside their differences and voted to extend tax credits for wind turbines and solar panels; and, fortuitously, this came on the heels of new federal regulations mandating a 32 percent cut in carbon from power plants that pollute our air by 2030.

But before this is proclaimed a miracle for the planet, there is a government-created problem, from the horse and buggy era, which must be dealt with. And the solution may lie in our cities and counties.

Since 2008, residential solar panel installations are up nearly 2,000 percent. This new industry powered by the sun has taken hold, creating jobs 20 times faster than the national average, while harmful carbon emissions have dropped. And in 2014, more than 31,000 jobs were generated by the solar industry. But, this is only a drop in the bucket for what is needed to meet the ambitious goals set forth in the Paris Agreement.

What is holding us back from a renewable energy revolution in the U.S.? Anyone who has ever tried to get a permit to put solar panels on their house knows it can be a soul-crushing and expensive endeavor. On average, it currently takes Americans eight weeks for their potential installation to be reviewed by all the relevant local government agencies. Most cities still do not even have an online process. Instead they force citizens to go to City Hall and stand in line for hours.

In order to speed up the permitting process, many solar companies are forced to pay permit expediters for access and approvals, adding costs and unnecessary delays. Expediters are more or less consultants or lobbyists who grease the wheels and know the system well enough to get approvals much faster than an individual or solar company ever could. That makes absolutely no sense.

A recent Lawrence Berkeley National Lab report, “How Much Do Local Regulations Matter?,” found that permitting and other local regulatory processes now “comprise the majority of total costs for residential PV [solar panel] systems,” thereby adding $2,500 to the final price tag for a 5kW solar system.

This can be fixed

The U.S. does not control the price of silicon from China that is needed to build solar panels, but does have control over many of the soft costs of solar, such as fees paid to permit expediters. Bottom line, the permit process should be online for all Americans, not just for the few lucky enough to live in places with local governments that have embraced the Internet.

This is why the U.S. Energy Department has launched a new effort, called the SunShot Initiative — it’s goal is to modernize the entire solar onboarding experience and get from permitting to plug-in in seven days. A number of cities are taking the challenge a step further – Livermore, California, has plans in place to take their process for connecting solar systems down to less than a day.

San Diego to the rescue

In order to speed up the solar permitting process, it is necessary to get people out of line, and instead, get them online.

Turn back the clock a couple years and the County of San Diego, like other parts of the country, encountered massive queues in their permitting offices. So, they decided to do something about it. An audit of their permitting system found that the number one reason people were waiting in line was for solar permits, followed by water heaters and HVAC systems. San Diego County decided to remedy this situation and bring their solar permitting process online. Their new customer-centric permitting effort has helped launch a solar revolution in the sun-drenched region, dramatically reducing the time and cost to install solar panels. Over the last five years, San Diego County has seen a 300 percent growth in solar permits, and they expect 30 percent growth year-over-year in solar permits for the next five years. The County’s new user-friendly online system has been recognized by the National Association of Counties as one others should replicate.

San Diego County has shrunk the whole permitting process, saving government employees time and the County money. By modernizing this process, it allows government agencies to focus on more challenging and time-consuming projects, like the next potential skyscraper. It also has allowed the County to even out workloads for staff. Not to mention the lessened aggravation and personal time citizens get back for not having to wait in line just to green their homes.

The permitting and code inspection process is an important and necessary function of local governments. These regulations and processes serve to keep us safe in our homes — in this case, so we don’t burn down our houses with improperly installed solar panels. If this country is serious about tackling climate change and living up to the commitments made in Paris, we must start using available technology to change inefficient processes, which add needless costs and delays. And then hopefully our kids’ only experience with a permit expediter will be what they read in their history books.