The event, that ran from Nov. 7-10, offered its 3,800-plus city leaders opportunities to discuss key topic affecting their communities. The impacts of the cannabis industry and its regulatory issues held a key place in these discussions, prompting officials to search for management tools and strategies through workshops, on-site cannabis facility tours and panels. 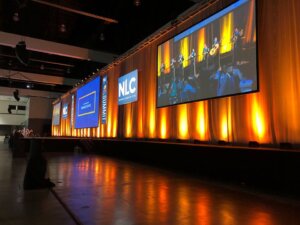 Speaking to elected officials at the summit Nov. 8, Accela’s Vice President of Strategic Solutions Greg Felix said the recent election results, and Canada’s federal legalization of cannabis last month, signal a growing appetite for cannabis in the U.S. and internationally.

“This train is coming at us very fast, and if you don’t believe me all you really need to do is look at what happened on Tuesday during the elections,” Felix said. “Three out of the four states with cannabis ballot measures passed. Utah now has a medical cannabis program that was enacted, so does Missouri, and Michigan expanded marijuana legalization to include both medicinal marijuana and recreational marijuana.”

After the midterm elections there are now 10 states and Washington, D.C. that permit recreational marijuana for adults 21 and up, while 33 states allow medical marijuana. These state results were joined by numerous localities throughout the U.S. that were considering if, how and when they should legalize the drug. Some of these cities included those in Ohio and Wisconsin that approved cannabis decriminalization measures or supported ballot measures to start cannabis reform.

Noting such results, Forbes called cannabis “the one clear winner in the midterm elections” and said more legalization is bound to follow in the coming year as pro-cannabis governors take their seats. Forbes pointed to governors in Illinois, Minnesota, New Mexico, New York and Wisconsin as the most likely to jumpstart the legalization process.

Felix said the primary drivers fueling legalization include new revenues that can support communities, consumer protection from dangerous products, a push to end black market sales that support crime, and the hope of alleviating the burdens on courts that must prosecute the comparatively minor crimes.

To take advantage of such benefits, Felix said governments need to equip themselves with the right tools and strategies and pointed to Accela’s private-public partnerships with state and local governments as potential guideposts.  Accela launched digital licensing systems for California and Michigan on tight compliance deadlines and deployed its out-of-the-box Civic Solution for Cannabis Regulation in large and small cities with Denver, Los Angeles and the California jurisdictions of Culver City.

“The idea here is to leverage the successful examples of other jurisdictions,” Felix said. “Because let’s face it, there is no book you can read, there is no class you can take that will tell you how to standup these regulatory frameworks and automate them.”

Accela’s cannabis solution offers cities an affordable, automated tool to issue licenses, renewals and license transfers in addition to processes related to investigations, hearings and occupational licensing. Felix said the solution has proven its effectiveness as governments have used it to offset data entry and record management workloads, while also using the service to provide cost savings, heightened cybersecurity and transparency.

The solution’s mobile app saved the city and county of Denver more $644,000 in staff time, drastically reducing hours spent by field inspectors on scheduling, documentation and obtaining approvals. Further, Felix said that system helped Denver to do away with many of its paper process associated with licensing, which saved an additional $80,500 per year in cost avoidance.

“For the most part, that makes these systems relatively self-funding as they drive out inefficiencies, Felix said.

To learn more about the best tools and practices in cannabis regulation click here.