The Mobile Citizen: Accela, the Construct API and…Lasagna? (Part 3 of 4)

This is the third post in a series on “The Mobile Citizen,” a look at how the Civic Platform is helping agencies of all sizes engage their mobile citizens and stay ahead of the “mobile mind shift.”

Wednesdays in the New York City office means a rotating assortment of cuisines for team lunch (follow @dshaeffbk for the occasional #foodtweet). Typically we gather to talk about work, upcoming weekend plans, sports, movies, anything really. Every now and then new faces will spice things up.

Earlier this month, Mark Headd and Seth Axthelm from our technical evangelist team were visiting. They work to enable, support, educate and innovate with Accela partners and customers to expand the Civic Platform. The lunch gave Mark and Amir Reavis-Bey, a co-founder of Civic Insight, the chance to catch up between bites of lasagna. As I eavesdropped on their conversation I realized that Mark and Amir’s relationship represented Accela’s commitment to empower Government Technology (“GovTech”) entrepreneurs to expand the Civic Platform and improve the connection between citizens and their government.

After Apple launched the App Store with the ability for developers to build apps, the iPhone became more than just a phone. Seth, in a 2014 blog post, made this point: “It is a fitness tracker, entertainment system, home automation remote, newspaper, productivity device, cash register and more — all because of the rich ecosystem built in part by developers.”

When the Construct API tool was introduced, it concurrently launched with a developer program to foster innovation and make it easier for aspiring GovTech entrepreneurs to grow their idea and build a product using data from the Civic Platform. Amir was one such entrepreneur.

Coming off his Code for America fellowship in the City of New Orleans, Amir joined with co-founder Eddie A. Tejeda to create Civic Insight to make it easier for anyone to understand what was happening in their city. Launched in New Orleans, the company quickly partnered with Accela customers Palo Alto, Sacramento and Dallas to give citizens new levels of transparency into building development in their city and neighborhood.

Later, Civic Insight took advantage of Accela’s developer program and used the Construct API to build a solution that makes place-based information simple and easy to understand. For example, Accela Land Management offers the permit data and Civic Insight pulls this data using the Construct API, enabling citizens to view this information in an intuitive, map interface on any device. 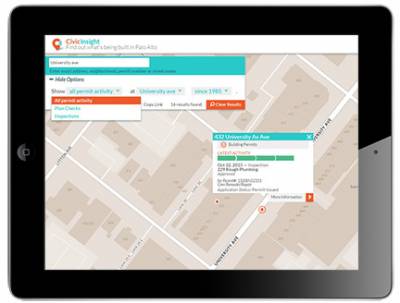 Now, as a strategic partner, Civic Insight will grow using Accela’s Construct API, benefiting citizens and hopefully inspiring other civic tech entrepreneurs to build on the Civic Platform by showing them what’s possible.

Improving communities, one app at a time

2016 has been called the year of government as an API. This openness is putting government on any device, in an experience designed for (and sometimes by) the citizen.

At Accela, we’re proud to say, we knew the value of the API well before 2016.

By opening up the Civic Platform via the Construct API, Accela wants to encourage developers to build new tools to improve communities. This openness is at the core of Accela’s design to be a platform with purpose: to ignite innovation and citizen engagement that transform how government functions.

That commitment was evident earlier this month at lunch. I hope it won’t be the last time I get to see it, whether over lasagna or not.

For more information on how Accela is enabling developers to expand the platform, visit our developer portal or check out last week’s post on APPCityLife – another Accela Developer partner.