The Mobile Citizen: What Makes a Good Mobile Tool? (Part 2 of 4)

This is the second post in a series on “The Mobile Citizen,” a look at how the Civic Platform is helping agencies of all sizes engage their mobile citizen and stay ahead of the “mobile mind shift.”

What makes a good mobile tool?

This was the question I was asking myself as I read the results of the annual Digital Cities Survey. The survey identified technologies and initiatives that cities are likely to have an increased focus on in the coming year. Mobile technology ranked in the top 3, behind only cybersecurity and open data.

In California, communities across the state are leveraging the Accela CRM mobile app to improve water conservation and combat severe drought conditions.

Soon after California Governor Jerry Brown’s April Executive Action to reduce water usage, the City of Palo Alto created a specific request type that allowed residents and officials to report water leaks and violations on the City’s mobile app, Palo Alto 311. Since June 1st, thanks to many such efforts, the City has consumed 33% less water vs. 2013 usage.

Making it easy for citizens to provide feedback

Turbocharging community meetings is another opportunity in the mobile world. In order to improve engagement, governments need to offer convenient channels for citizens to participate in the legislative process.

The City of Hanford, California, used Accela Civic Voice to enable City staff to get citizen feedback before taking an item to council. In a May 2015 report in GCN, Hanford City Clerk Jennifer Gomez said, “I like the idea of another tool for people being able to communicate, whether it be the public communicating with the City or the City communicating with the people.”

So now, using Civic Voice (part of the Accela Legislative Management suite), the City of Hanford is able to get greater public feedback and help avoid the possibility of being criticized for operating in a silo. Currently, the City is requesting feedback on municipal construction projects and asking citizens about their “vision for Downtown Hanford.”

Hernando County, Florida, recorded and uploaded over 290 videos in a year using Accela Civic Streaming (also part of Accela Legislative Management) and created the Hernando County Media Center (a sort of “Netflix for Government”). As a bustling vacation destination, the County needs to service homeowners who aren’t living in the county full time. Civic Streaming allows citizens to remain engaged regardless of location or time by participating in meetings remotely.

As a big fan of “The West Wing,” I can imagine watching an episode on my iPad, getting inspired and having to go no further than my City’s media portal to get involved (hence “Netflix for Government”). Whether it’s streaming a council meeting or watching a debate about a building permit for a proposed restaurant in my neighborhood, technologies like Accela Civic Streaming mean I can get involved on my own terms. 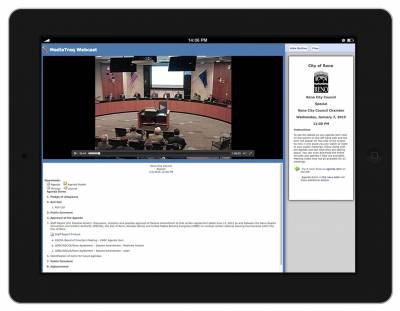 Of course, these are just a few examples of how local governments are using technology (and the Accela Civic Platform, specifically!) to meet the new demands of today’s “mobile citizen.” As communities continue to consider new strategies to engage their mobile citizens, it’s important that they first figure out the pain points they want to solve.

Previous Post: The Mobile Citizen: Reach Them Where They Are (Part 1 of 4)